Comsure would like to thank all those who came to the Tax Risk – New UK ‘Non-Dom Proposals’ – The Implications and Opportunities, held on the 16th September 2016

The Comsure team hope that all attendees found the 2 hour talk by Tim Keeley, on Tax Risk, both informative and engaging.

Comsure would like to thank all those who attended the 13 September 2016 Cyber Security Workshop – this being the 1st of 4, the others are on

The Comsure team hope that all attendees found the talk informative and engaging, and did not find the facts too daunting

Further, you will find some pictures from the event and please like our Facebook page (Comsure Group) where you can find important news musings and upcoming events.

Finally, if you wish to learn more about Comsure and its services (consultancy, training and/or AML technology solutions) please feel free to contact me at any time. Furthermore, do not forget if you want to know more about Comsure events please log onto the Comsure website (www.comsuregroup.com) and ensure you are registered for its newsletters.

In closing, there are still spaces on the next Cyber Security Workshops you can find the registration details in the links below

Please do recommend the next sessions to a friend or recommend a colleague and get them to register.

Sunday 17th July 2016 – While watching the 4th and unfortunately last day of the England v Pakistan cricket test match at Lords, I was minded to think about the sport of Cricket and its proud tradition as being a by-word for fair play.

My questions is, is this still true?

As we know there are always dangers and this reputation will be lost if the key problems it faces today and in watching Saleem Malik [Pakistan] who was subject to a Life ban (Overturned in 2008) and the First cricketer to be jailed for bribery and the other 33 bans (click here) i am reminded the problem is not very far away.

With these statistics it’s worth considering the fact that Cricket has always been inextricably linked with gambling and therefore the greatest threat to cricket’s integrity is that of ‘match fixing’, together with what has become known as ‘spot fixing’

Sir William Draper, the Duke of Dorset and their acquaintances, who initially drafted the Laws of Cricket in 1774, reportedly also attempted to control betting on the sport, which was at the time ‘prodigious’.  During the 19th century, illegal bookmakers flocked to the streets of St John’s Wood, where Lord’s Cricket Ground is still situated.

It is now possible to watch cricket on television and bet on it, almost every day of the year. The popularity of the game has continued to rise and so has the associated betting. After India won the World Cup in 1983, live telecasts to the subcontinent commenced on a regular basis and the illegal gambling markets started to develop, with ever increasing sophistication.  Now illegal betting is worldwide and reportedly the amount placed illegitimately on just a single one day international match between India and Pakistan might be circa US$500 million.

With the above matters in mind I was reminded of the Transparency International (TI) action plan that focuses on the most obvious and dangerous corruption risks posed by poor governance. TI provides a road map of the essential actions that the International Cricket Council (ICC) can take to bring needed changes to cricket, step by step.

Maybe if we played better my mind would not have drifted but as it did I hope the above is interesting……!!!!!!!

Comsure would like to thank all those who came to the Employment and Health and Safety Law Business Leaders Briefing, held by Peninsula Business Services, on 24th March 2016

The Comsure team hope that all attendees found the 3 hour talk on how to manage employee behaviour, entitlements and obligations both informative and engaging.

Seychelles 2016  – thank you to the Seychelles Financial Services Authority [FSA] for all their support following another successful 2 day AML update workshop.

As can be seen in the photos, 43 delegates attended what transpired to be an active and dynamic event that explored the many variables of money laundering risk that is at the focus of all business not only in the Seychelles but globally.

Interestingly, this workshop coincided with the start of the islands FATF assessment and the islands own money laundering risk assessment. 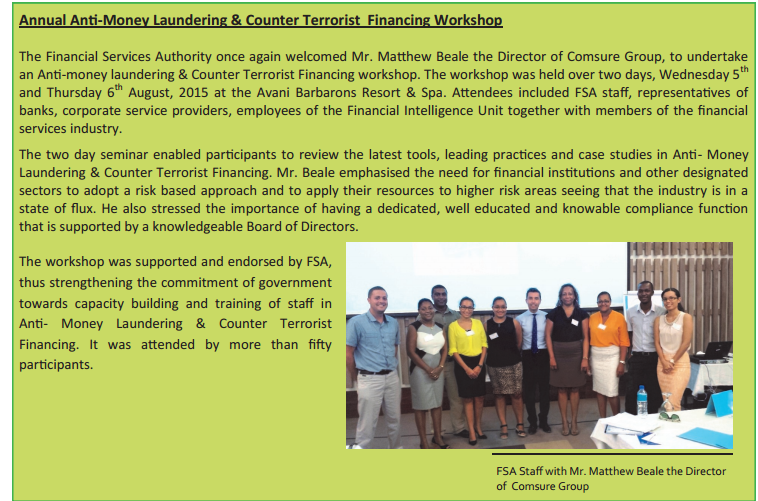 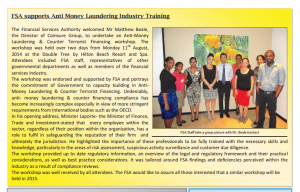